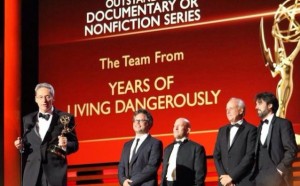 It was a great night Saturday at the Emmys for non-fiction series with a science and/or climate theme. Fox’s “Cosmos” won four Emmys, including “Outstanding Writing for Nonfiction Programming.” Showtime’s “Years Of Living Dangerously” won the top award, “Outstanding Documentary or Nonfiction Series” (along with PBS’s “American Masters”).

“Years of Living Dangerously” is the first documentary series devoted to climate change ever to appear on a major network or premium cable. Its nine episodes were produced by James Cameron, Arnold Schwarzenegger, and Jerry Weintraub and three former 60 Minutes producers. I was Chief Science Advisor for the series alongside Heidi Cullen.

Earlier this month, “Years” was named as the first honoree of the 2014 Environmental Media Awards, winning “The EMA Outstanding Achievement for Environmental Content Award.” The landmark series generated dozens of major news stories and more than a billion (!) media impressions.

YEARS received great fanfare on Showtime — hopefully this will put another spotlight on the show and encourage new audiences to watch it on Amazon and the like. Also, this fall the National Wildlife Federation will be releasing YEARS lesson plans in middle schools, high schools and colleges around the country. Our goal has always been to tell the story of climate change to as many people as possible, and this Emmy win goes a long way towards helping accomplish that goal.

The entire series will be available on DVD September 7, and Amazon has begun taking preorders already.  The Katingan Project is featured in the  premier episode.