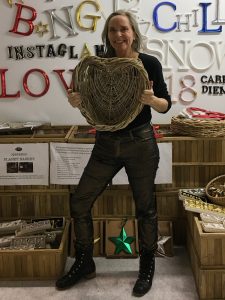 Emily Readett-Bayley’s designs are inspired by the abundance of natural resources found in Indonesia but she has always taken care to source from a sustainable, ethical supply. She uses fast growing albizia wood, salvaged teak, coconut wood coconut shells, recycled glass, coir and feathers and non-timber forest products such as bamboo, rattan and reeds.

Emily works directly with the craftspeople and there are no middle men involved . Her Balinese husband co-ordinates production in Bali where our POSH Graffiti wooden letters have been made by the same village rice farming community for over 25 years. Many farmers are excellent wood carvers and use this important secondary business to suppliment their income and so sustain their unique agricultural system known as Subak which is recognised by UNESCO. The farmers plant fast growing albizia trees around their rice fields to provide wood.

In Borneo and Sumatra, Emily is working directly with indigenous farming communities alongside the local teams who are managing Indonesian Ecosystem Forest Restoration concessions. 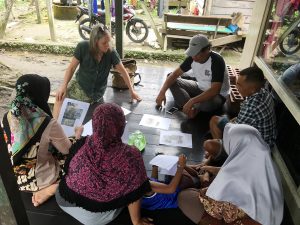 For many years Emily has pioneered the concept of stylish design and exceptional craftsmanship with an ethical policy.

Emily takes this idea even further by linking artisan craft with sustainable agro-forestry which in turn  preserves the traditional skills and heritage of the indigenous people who hold the key to symbiotic living in and around the forest. 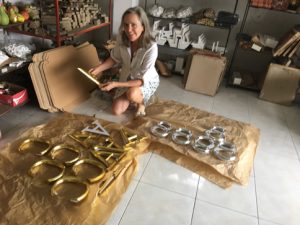 1989 Emily visits the island of Bali in Indonesia working as production manager for a British theatre company, sourcing and rehearsing for a production of Shakespeare’s Macbeth with an Asian inspired design and a Balinese Gamelan orchestra . Whilst commissioning wooden masks and props Emily notes the unique craftsmanship and the variety of natural materials used by the Balinese

1995 and 1996 Emily and the woodcarvers produce hand gilded, carved wooden Christmas decorations for Liberty, on Regent Street in London

May 1997 Emily Readett-Bayley has a trade stand at Top Drawer, London offering a range of designs to other retailers. The company wins an award for the stand design and sells to many shops in the UK launching, a perfectly timed, East Meets West collection of bamboo tableware

1998 Emily Readett-Bayley Ltd is incorporated and is selected to exhibit as part of the Scenes d’ Interieur 10th Anniversary exhibition at Maison et Objet in Paris. The company supplies products to stores worldwide.

1999 – 2011  Exhibited at trade shows in London, Birmingham, Paris, Tokyo and Frankfurt and continues to sell her designs world wide and ERB has press coverage in a wide variety of national and international interior design magazines and newspaper colour supplements.

2006  Exhibits reclaimed teak garden furniture at Chelsea Flower Show and continues to do so for 6 years .

2011 ERB Exhibits as part of  “Britain is Great and Green” at Milan Fashion week.

2012 Emily visits  The Katingan Project an important Ecosystem Restoration Project covering 200 000 hectares of critically endangered lowland peat rainforest in central Kalimantan. This gives her the idea of setting up rattan basket and furniture workshops to supply the international market direct and add value to the wild rattan grown sustainably in forest gardens by the local Dayak communities. The rattan is usually sold as a raw material to middle men for low prices and they sell it on to factories in Java or China.

2013 The first container load of baskets are shipped direct to the UK from Katingan.

2013 Half of the basket shipment is sold to a film production company at Pinewood Studios who are filming the new Star Wars movie.

2014 The rattan baskets appear in the opening scene of Star Wars: The Force Awakens

2016 Emily launches Operation Planet Basket an initiative to develop sustainable agroforestry and the associated artisan crafts and market access  for the marginalised communities living in an around threatend eco systems in Indonesia.

2018  Emily Readett-Bayley designs and supplies samples of rattan and non timber forest products to the Kingfisher Group, all handmade by the local communities living in and around the Katingan Mentaya Ecosystem Restoration Concession in Central Kalimantan.

2018  Emily Readett-Bayley undertakes consultancy work for the R.S.P.B. investigating the possibility of producing handicrafts and accessories from non-timber forest products made by the Indigenous Batin Sembilan community of hunter gatherers from Hutan Harapan. Translated from Indonesian as the “Forest of Hope”, this is the last significant area of protected lowland rain forest in South Sumatra which is designated as an Indonesian Ecosystem Restoration Concession supported by the RSPB Rainforest Guardians.